The meeting planned for this Wednesday 14th September will only be open for messages of condolence and a minutes silence; no further business will take place.

The Parish Council recently held their Annual Open Evening at the Church of Ascension Hall, and it was quite well attended.

Most of the Parish Councillors were in attendance along with LCC & SKDC Councillor Linda Wootten and SKDC Councillor George Chivers, aal of whom were able to answer many questions raised during the evening.

One of the main bones of contention was about the closure of the side entrance gate at the Lion Gate entrance to Belton Park. Ian Cooper the manager at Belton was on hand to explain and answer the questions posed.

Another was the diabolically slow progress being made with the Blessed Hugh More School site. The Parish Council had their application for an Asset of Community Value (ACV) accepted by SKDC in September 2020. Since then, numerous efforts to move things on have been made by the parish clerk to try and get answers from SKDC about exactly what we can do with the land. The Clerk and chairman have met with representatives of SKDC several times, but nothing ever comes of it.

We have also written to the Leader of the Council who passed it on to others. Our two District Councillors both raised it at the offices for us. At first, we had some success, but unfortunately that soon stopped.

Opinions were being sought on the night about the best way to mark the Queens Platinum Jubilee. The one that came out with the most support was the purchasing of a Special Bench. This will be taken forward by the council.

The Highlights of the Evening, of course, Tom Childs Award and the Best Kept Gardens Awards.

This year four people were recognised for their work to enhance the quality of life within the parish, each received a cheque for £250 to give to their nominated charity. They also received a Certificate and a wooden bowl made from local wood. These were kindly made for us by one of our parishioners Doug Mitchell.

The well-deserved winners were presented with their awards by Kath Childs, Tom’s widow, and the council chairman Geoff Parnham.

Terry Claxton was honoured for his ongoing voluntary work at St John the Baptist church and his work locally in Harrowby. He chose to contribute towards a Queens Platinum Jubilee bench.

Tony Parker; for his continued work in preparing and keeping the Millennium Garden looking so great each year and for his work volunteering with the Parish and Woodland Trust Working Parties. He also keeps the hedges trimmed at the Hills and Hollows. His nominated Charity was Lincs Air Ambulance

Stephen Storey; for his continued collecting for charities with his Christmas Lights and other displays through the year. He raised over £3000 for local Charities. His nominated Charity was St Barnabas Hospice. 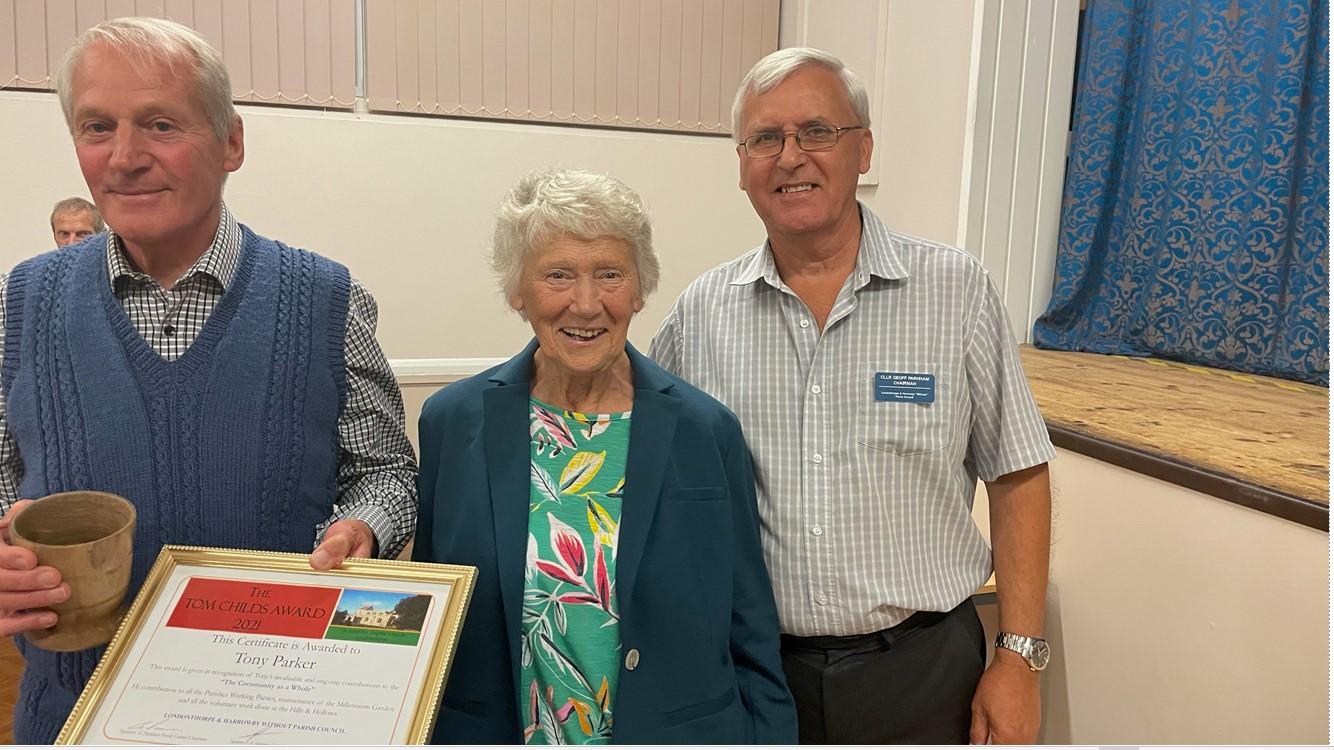 The fourth winner was out of the country at the time, and he will be informed and honoured later.